The American Pilots’ Association has written state pilotage authorities calling them to take action on the use of dangerous “trapdoor” pilot-access arrangements.

The American Pilots’ Association has written state pilotage authorities calling them to take action on the use of dangerous “trapdoor” pilot-access arrangements.

The letter follows the December 30, 2019 incident in which Captain Dennis Sherwood, a New York licensed pilot, was killed from a fall while embarking an inbound containership. The pilots’ association says that embarkation in this instance was via a combination arrangement of an accommodation ladder and a pilot ladder.

“Such a combination is required whenever the distance from the surface of the water to the point of access to the ship is more than nine meters,” says the association. “This particular combination arrangement, however, involved a trapdoor in the platform of the accommodation ladder with the pilot ladder hanging from a cross beam near the bottom of the platform, and with the top step of the ladder significantly below the level of the platform.

“This requires a pilot to pull himself or herself up through the trapdoor while twisting to get a secure footing on the platform. Captain Sherwood fell while attempting to make that difficult maneuver to transfer from the pilot ladder to the platform above.

“This trapdoor arrangement is currently found on a number of ships with accommodation ladder-pilot ladder combinations, despite the facts that it has long been considered by pilots to be unsafe and that the IMO has recognized that it is unsafe by taking steps to eliminate it. Since at least 1979, IMO guidelines have recommended that pilot ladders used with a trapdoor extend to the height of the platform’s handrail. The purpose of that recommended practice is to bring the ladder steps up to a level from which the pilot can step across to the platform rather than pull himself or herself up to it.”

The association notes that nine years ago, the IMO revised the SOLAS pilot transfer regulation (SOLAS V/23) and its implementing guidelines (Res. A.1045) in response to continuing complaints about unsafe pilot transfer arrangements. The effective date for the new standards was July 1, 2012. Several of the revisions addressed the use of trapdoors in combination arrangements and were intended to eliminate pilot ladders that hang from the bottom or near-bottom of the platform, as well as other problems with such arrangements.

“Against this background, it is frustrating, and now tragic, that pilots continue to encounter, and have to deal with, trapdoor arrangements like the one found on the ship from which Captain Sherwood fell,” says the association.

The association says that complying with Regulation 23 and Resolution A.1045 is not an expensive proposition. Replacing or retrofitting equipment to meet the standards would not be a significant project.

The letter urges state pilotage authorities to take measures that include:

By whatever means you normally use to communicate with your pilots and pilot association(s), remind them that a pilot may refuse to use a transfer arrangement that he or she reasonably believes is unsafe. In particular, you should note the problems with a trapdoor arrangement similar to the one from which Captain Sherwood fell, and provide a brief description of the current IMO standards for combination arrangements using a trapdoor. You should also confirm that you will support, and defer to the judgement of, a pilot who refuses to use a transfer arrangement that he or she believes is unsafe, unless that refusal is later shown to be clearly unreasonable or insincere.

Message to the maritime community

By whatever means you consider appropriate, issue a notice to pilot users and others in your local maritime community that you are aware that some ships may offer a pilot transfer arrangement consisting of an accommodation ladder/pilot ladder combination with a trapdoor that does not meet IMO standards in effect since at least 2012. Further, advise that, in response, you have reminded the pilots that they may refuse to use a pilot transfer arrangement that they reasonably believe is unsafe, particularly the offending trapdoor arrangement. Urge ships with a trapdoor arrangement to bring their arrangements into compliance with the current IMO standards as soon as possible in order to avoid potential disruptions to ship schedules and port operations. Ships can either (1) switch to the more traditional system of a pilot ladder hung from the ship’s deck, positioned adjacent to the accommodation ladder platform, and secured to the ship’s hull at a point nominally 1.5 m above the platform; or (2) ensure that the trapdoor arrangement meets the following IMO standards:

a) pilot ladder rigged through the trapdoor extending above the platform to the height of the handrail;

c) pilot ladder remains against the ship’s side.

Sat Feb 29 , 2020
On Tuesday, a South African marine pilot narrowly escaped injury after a rope ladder broke while he was disembarking the ship in Durban's harbor. 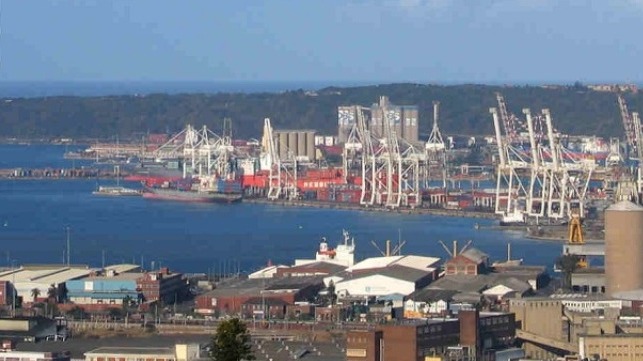