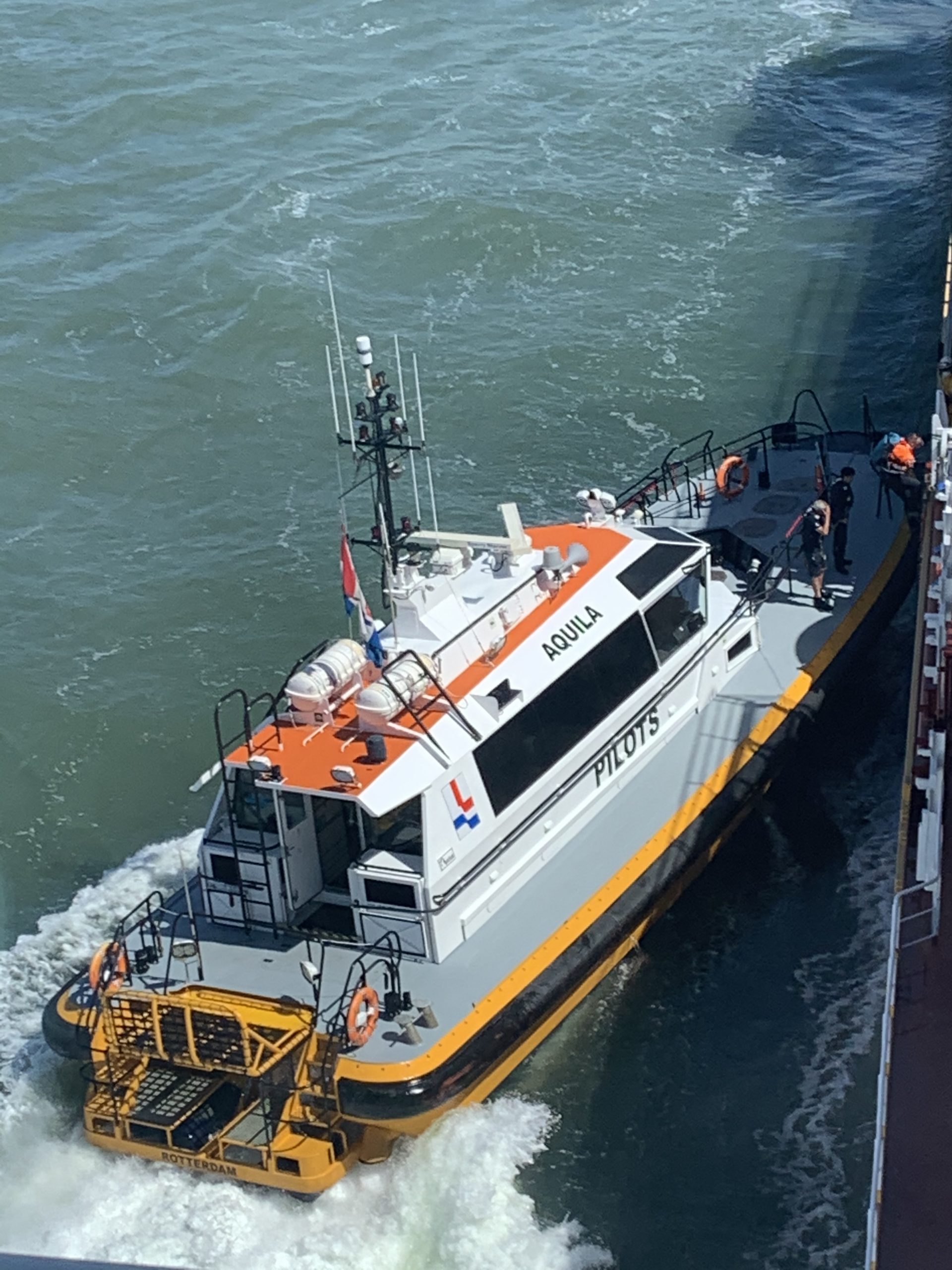 The AQUILA alongside a ship. Note the the massive MOB installation on her stern

The safe approach of the pilot boat depends on many factors. The main ones are dependent on the vessels characteristics and layout, loading condition and the place for embarkation.

The minimum length of 1,5 meters is very important for safe embarkation and disembarkation. It allows the pilot to step on to the pilot ladder, while at the same time holding on to a side rope. It is very difficult to hang on, while standing on a ladder, when your hands are at waist level, as can be seen in the below picture.

There should be no fendering near the pilotladder arrangement

Dependent of the ship’s freeboard and draft, it is possible that there is not a standard solution for placing the ladder. For instance, when the pilot boat requires a height of 2 meters above the waterline, and a minimum pilot ladder length of 1,5 m is required, a minimum freeboard of 3,5 m is required. On some coasters that may not be possible from the main deck.

By design, there should be no fendering near the pilot ladder. On ships where fendering gets in the way of the pilot ladder, pilot tender or fast launch craft, dangerous situations can occur. On one occasion a fast launch was overturned by a fender tipping over the launch. Four people ended up in the water as a result.

Main Items to keep in mind:

3.3. Safe and convenient access to, and egress from, the ship shall be provided by either:

.1. a pilot ladder requiring a climb of not less than 1.5 m and not more than 9 m above the surface of the water so positioned and secured that:

.1. it is clear of any possible discharges from the ship;

.3. each step rests firmly against the ship’s side; where constructional features, such as rubbing bands, would prevent the implementation of this provision, special arrangements shall, to the satisfaction of the Administration, be made to ensure that persons are able to embark and disembark safely;

Adequate lighting shall be provided to illuminate the transfer arrangements overside and the position on deck where a person embarks or disembarks.

6 Safe approach of the pilot boat

Where rubbing bands or other constructional features might prevent the safe approach of a pilot boat, these should be cut back to provide at least 6 metres of unobstructed ship’s side. Specialized offshore ships less than 90 m or other similar ships less than 90 m for which a 6 m gap in the rubbing bands would not be practicable, as determined by the Administration, do not have to comply with this requirement. In this case, other appropriate measures should be taken to ensure that persons are able to embark and disembark safely.