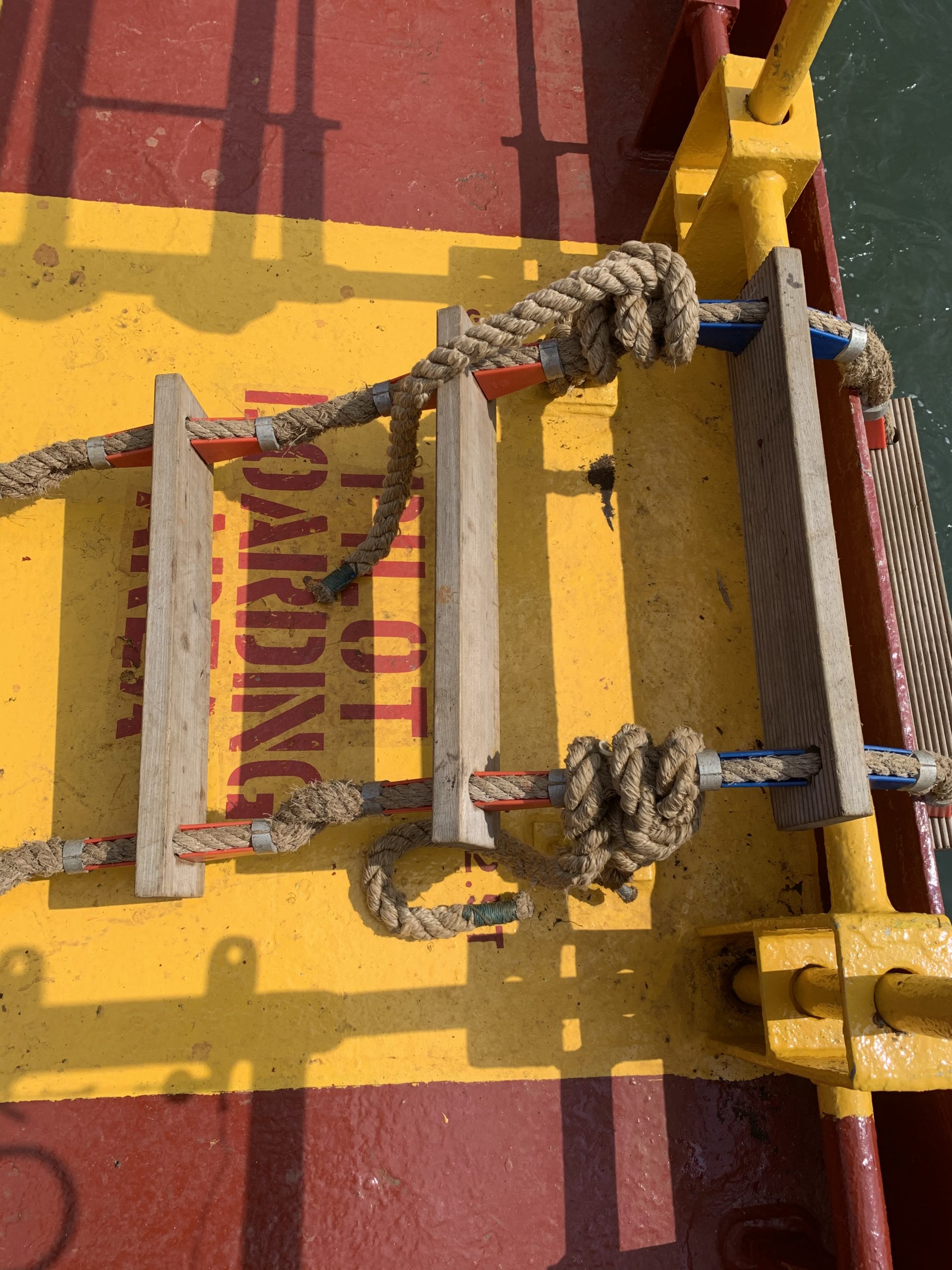 Pilot ladder safety starts with the ladder being secured correctly. If it is not secured properly, it may lead to accidents and damage to the ladder. And it is not that difficult.

The Pilot Ladder should be secured to the ship’s deck, on designated strong points, by means of the ladder’s side ropes.

The easiest way to secure the ladder is the use of two strong (at least 2 x 24 kN) manila ropes directly attached to each side rope of the pilot ladder, by means of a rolling hitch knot. This will transfer the weight of the ladder arrangement directly onto the designated strong point and will not damage the ladder in any way.

The ladder should be rigged over the deck edge, in an opening in the ship’s railing or over a bulwark. In the latter case a bulwark ladder must be used for safe access. Ideally, the deck edge should be rounded to prevent the cutting or damaging of the pilot ladder’s side ropes.

In the next picture, the design and the rigging of the pilot ladder has been done by the book. This ensures 1) a correct weight transfer from the ladder onto the deck, and 2) there is no excessive wear caused by sharp edges or incorrect load on the ladder’s parts. In this case the strongpoints have been certified to 4 tons SWL. A top job!

Always use a designated strong point to secure the ladder. Never use railings or pipelines since they have no certified strength.

In some cases the design of the Pilot Access Area is so poor that it seems hand railings with sharp edges are the only option to secure the ladder. This will cause damage and wear to the ropes of the ladder.

The following poster is a very clear instruction posted at the pilot boarding area onboard some Maersk vessels. It is an excellent example of good practice and leaves no doubt what a properly secured pilot ladder should look like:

In the next picture it is clear that the design of the pilot ladder access point sometimes does not allow for the required length of rope to secure the ladder, like in the previous case. There are two eyes, which are only inches away from the rounded edge and therefore useless. In this case, two designated eyes (strong points) should have been welded onto the main deck , preferably at a good distance from the ship’s side, well marked and load tested to at least 48 kN each, which is the total MBL ( Minimum Breaking Load ) of the side ropes.