Pilot ladders are such a risk “that one pilot referred to climbing them as a ‘leap of faith’,” Madelaine Dowd of Helm Innovation told MJ.

What is clear, however, is that “inadequate rigging is the main cause”, he said: “Securing arrangements have become extremely variable.” There are multiple reasons for this state of affairs: Cockrill cites “some ambiguity” between SOLAS and ISO rules, plus “a reduction of crew supervision that allows bad practices to become the norm”.

Unfortunately, there are numerous ways to get pilot ladder rigging wrong; the most common involve putting the load on the (far weaker) steps instead of the side-ropes, relying on deck tongues and shackle fastening the rope: this allows the ladder to slip just a little, transferring shock loads to weak points and possibly breaking the pilot’s grip.

While the industry is pulling together to get the safety message out, Helm Innovation has focused on finding a technical solution: “There’s been no significant innovation in pilot ladders beyond a few tweaks,” she added.

Therefore, the company’s embarkation system aims to standardise deployment, “ensuring it’s properly secured, and avoiding inappropriate stresses”, she explained: “We’ve engineered it so the mechanism can only work in one way.”

Further, it allows for another layer of security. “The pilots looking up at the ship often can’t see the top. Our system visually communicates that it’s been rigged correctly.”

Interestingly, the idea is the result of a competition: the Embark solution has gained recognition from InnovateUK, winning Madelaine the Young Innovators Award – despite her drive, Dowd is still under 30. While the organisers hadn’t envisaged such concrete results, she applied skillsets honed on designing for disaster resilience to come up with “something that would make a difference”.

The product is currently undergoing Lloyd’s Register certification testing: Cockrill (one of the project’s advisors) added: “It’s a big challenge, but this is a viable attempt to offer a quick, safe and effective way to ensure regulatory compliance.”

For more information: check out: https://www.helminnovation.co.uk

Sun Feb 28 , 2021
This week, Maersk has issued guidance notes on the correct use and layout of trapdoor pilot ladder arrangements. Hopefully all non compliant and dangerous arrangements of this kind will be replaced soon. A great amount of effort in achieving this has been done by various maritime pilots around the world. […] 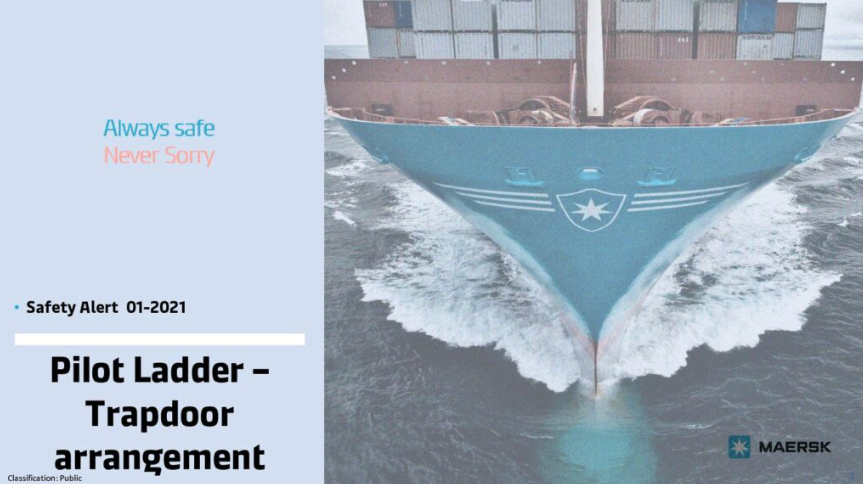